Turkey is the winner of this year's Best Europa stamp contest organised by PostEurop. The winner of the last three editions, Hungary finished second and Portugal third. 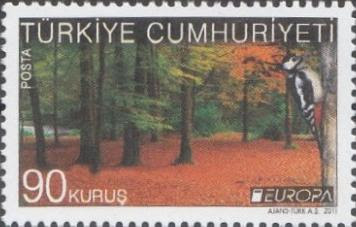 this 0.90 TRY stamp is part of a two stamps set designed by Bülent Ates.

The Best Europa stamp design competition is a yearly event that takes place during the Plenary Assembly of PostEurop. The first competition took place in 2002. All official Europa stamp issues can enter the competition.
The result of this competition was announced during this year's Plenary Assembly in Istanbul, Turkey on the 12th October.
The stamp has been selected via the internet ! All people could vote through PostEurop's website ! This year's Best Europa Stamp competition reached a new record high of 5,576 number of public votes registered from all over the world, a sharp increase of 300% from last year's total number of votes due to the growing public interest and popularity.

A jury of 7 members (stamp designers, philatelic design directors) awarded earlier this year, the first Best Europa stamp - Jury prize to Cyprus ! This award don't replace the Best Europa stamp prize selected by the internet voting but is a second prize starting from this year.

Postcrossing.com wrote about the contest on their blog, asking their members which stamp the voted for.

I am from Turkey, I live in the Netherlands (already 17 years),

I can offer Turkish, Turkish Cyprus and Netherlands Europe cept

waiting for your first sending