Istanbul, from a New Strategy to Deliverable

Last year, we were in Istanbul, to hold our Philatelic Forum. After reviewing the EUROPA stamp competition results survey, we took many decisions impacting the future of EUROPA stamps. It was time to adopt a new strategy beginning with the legal framework. There was a need to officially clarify the situation with regards to the use of the EUROPA logo and need to adhere and respect logo guidelines before issuing EUROPA stamps. This new logo was launched and registered internationally.

logo used with the permission of PostEurop
Starting from January 2012, this logo will be the only authorized trademark, bringing us an important step further in the right direction. As mentioned earlier, 2011 was a transition year for our philatelists. Needless to say, we had been very busy all year round with the EUROPA 2011 theme: Forests, which was aligned and realized in full collaboration with the United Nations Program, International Year of Forests. Our First Jury prize Other important aspect discussed in Istanbul was on increasing the votes and growing the coverage of the competition whilst rebuilding the link we had with Philatelists. Therefore, we introduced two innovations: a Jury Prize and a collection album. The Jury Prize was managed by David E. Failor. Our first Jury was composed of independent designers or philatelists experts. We had Cyprus Post (Cyprus) emerge as winner of the very first Jury Prize. An announcement was made at the Brussels Town Hall amongst hundreds of passionate philatelists… And the winner goes to... The Jury prize was also a teaser for the main competition: the most beautiful EUROPA stamp of the year. The classic online competition ran well this year, as we received more than 5,500 votes (compared to 1,305 last year) with PTT Turkish Post (Turkey) emerging as a clear winner despite tough competition. The second and third place went to Magyar Posta (Hungary) and CTT Correios (Portugal). For Hungary, it was their 5th time in a row at winning a prize. During the Plenary Assembly Dinner, Mr. Jan Sertons, who was part of the Jury handed out the Jury prize to Mr. Andreas Gregoriou, the CEO of the Cyprus Post (Cyprus). Mr. Jean-Paul Forceville, our Chairman, handed out the Gold EUROPA stamp prize proudly to Mr. Osman Tural, CEO of PTT Turkist Post (Turkey). Behold, another surprise The biggest surprise was kept for the morning after. On every desk, of every delegate was the beautiful and rare EUROPA Collector Album (below). 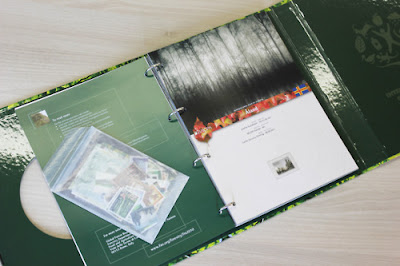 This limited edition album was designed and produced by PostEurop headquarters. The richness of it comes from all the stamps we received from our members. 41 operators participated in the project and there were in total 69 real EUROPA stamps in the album. This Collector Album will be used in future as the official list of EUROPA published stamps. Only stamps that strictly fulfilled the official guidelines will be included in these albums. Building on this, the 2012 EUROPA theme will be “Visit…” and the album can be used as a tourism promotional tool in which each Europa stamp presents a “window” to discover more about our members’ country. Another innovative element will be the use of new technologies such as Quick Response (QR) codes and augmented reality (AR) to make EUROPA Stamps more interactive by enabling viewers to further discover more things behind the stamps and virtually travel across Europe. PostEurop believes that this edition will be even stronger than the 2011 edition. As it will touch your country, it will be important to have the most attractive, recent and accurate information possible as well as the best support possible. And on that, PostEurop really counts on you!