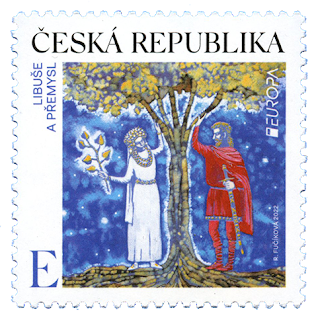 the stamp is issued in a mini-sheet of 6 stamps 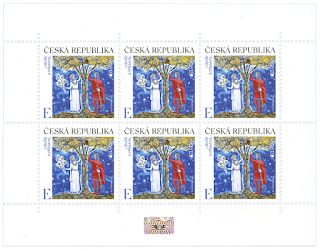 According to a legend, Přemysl was a free peasant who attracted the notice of Libuše, daughter of a certain Krok, who ruled over a large part of Bohemia. Libuše succeeded her father, and her councillors demanded that she marry, but because Přemysl was not a nobleman she recounted a vision in which they would follow a horse let loose at a junction, and follow it to find her future husband, making it appear as if it was the will of fate not her own wish. Two versions of the legend exist, one in where they are to find a man ploughing a field with one broken sandal, and another in which the man would be sitting in the shade of a single tree, eating from an iron table (his plough). They did so and found Přemysl exactly as foretold. source Wikipedia.