Note : Again, many countries not using the logo but only the CEPT letters. Most stamps issued on the 28th April. 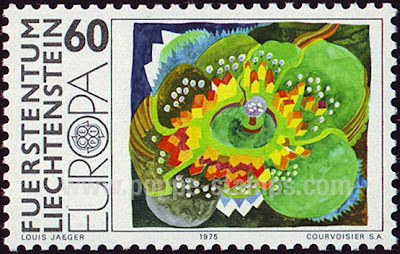 Eurovision Song Contest 1975
Stockholm (Sweden)
Winner: Teach-In "Ding-A-Dong" (The Netherlands)
my personal favorite that year: The Shadows "Let me be the one" (United Kingdom)

You are a Eurovision Song Contest lover :D I'm too. I also love EUROPA Stamps :D.
My fav ESC song of All Times is Secret Garden Nocturne. I'm from Romania and my fav from Romania is Let Me Try :D

Yes it's funny to find another Eurovision-Europa stamps fan :o)