Well next month we will reach the last quarter of 2010.

Armenia, Great-Britain and Norway have announced their 2010 Europa stamps issue during this period.

Only from two countries we don't have any information yet !

At this moment of the year, Albania issued only two stamps yet.

Last year they issued almost all their stamps in the last two months of the year. Their 2010 Europa stamps was issued on the 11th December ! Maybe it will be the same this year ? Wait and see...

The Norden stamps is a common issue between the Nordic countries. It is as old as the Europa stamps !

The idea of a Norden issue with a common motif was bred by Foreningen Norden [the Norden Association] in a letter to the five Nordic Postal Administrations already in 1951. At the conference of the Nordic Postal Association in March the same year the consensus was to accede to the idea, but of practical reasons it could only be accomplished later.

The first issue of 1956 had a common motive representing five flying swans. The Swan motif emanated from a poem from 1946 by Hans Hartvig Seedorff Pedersen titled "Svanerne fra Norden" [The Swans from the Nordic Countries], which is a tribute to the free community in the five countries each symbolized by a swan - Denmark, Finland, Iceland, Norway and Sweden.

A competition with an artist from each five country : Viggo Bang (Denmark), Signe Hammarsten-Janson (Finland), Johannes Haukland (Norway) and Mark Sylvan (Sweden). Iceland participated with an illustration to the poem by artist Jón Stefánsson.

It was decided to choose the Danish contribution and that the stamps (two from each country) should be ready for during second half of 1956. As well proofs as stamps were engraved by Swedish chief engraver Sven Ewert. 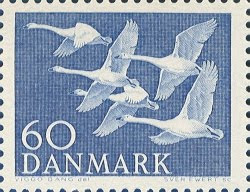 On the 1st October 1956, the postal administrations of the five Nordic countries announced at the same time that "in order to accentuate the Nordic cohe-sion and the importance of the Nordic cooperation in various fields" they were going to "issue some special stamps with common motif on the Nordic Countries' Day, 30th October 1956". Each country issued the stamps with two values in red and blue colours respectively.

We had to wait 13 years to see the next Norden issue (although 3 Nordic countries Denmark, Norway and Sweden, issued in 1960 a common stamp to celebrate the common airline company SAS – this issue is often considered by Norden collectors as being part of this collection). In 1969 the common design was five Viking ships from a rock carving.

In 1973 - The Nordic House in Reykjavik and in 1977 five water-lilies in pure water symbolising the environmental collaboration. Since that year, the Norden stamps bear a common logo – a post horn made of five horns.

In 1980 it was decided to issue the Norden stamps every three years and (as the Europa stamps since 1974) to follow a common theme instead having a common design.


The Faroe Islands issued in 1989 two stamps following the common them « folk costumes » but those stamps don’t bear the Norden logo.


Since 2004, the Norden stamps are issued in souvenir-sheets following a common them who runs during 3 issues: 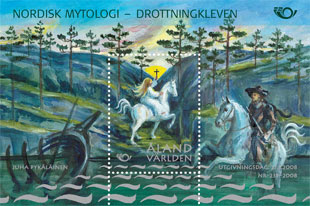