Did you know that the Europa stamps had a little brother on the American continent ?

Since 1989, the member countries of the Postal Union of the Americas, Spain and Portugal (UPAEP) issue the so called America-UPAEP stamps.

As the Europa stamps, each country issue a single or a set of stamps following a common theme. Each stamp bears, the word "America" and/or just the "UPAEP" logo.

Two European countries are member of the UPAEP: Portugal and Spain. Portugal took part only a few years at the America-UPAEP issues - 7 times between 1993 and 2003 as Spain is taking part non-stop since 1989.

If somebody want's to swap America stamps with me for Europa stamps, don't hesitate to contact me ! :o)

Alderney is part of the Bailiwick of Guernsey and its stamps are valid throughout the Bailiwick. Stamps issuing since 1983.

The idea for the UN to issue stamps originated in 1947 with José Arce the ambassador from Argentina and president of the United Nations General Assembly, who was himself a philatelist. (The League of Nations had used overprinted Swiss stamps.) The UNPA came into existence by agreement with the U.S. in 1951, soon after the UN moved into its headquarters in Manhattan. Prior to that, the UN used the facilities of the United States Post Office Department.

Ordinarily, mail must be taken to the UN offices and franked with the appropriate UN stamps. From time to time, though, by agreement with the United States Postal Service, the UNPA maintains a temporary office elsewhere, usually at stamp shows or special events.

Email ThisBlogThis!Share to TwitterShare to FacebookShare to Pinterest
Libellés : general

This stamp is issued in a mini-sheet of 9 stamps 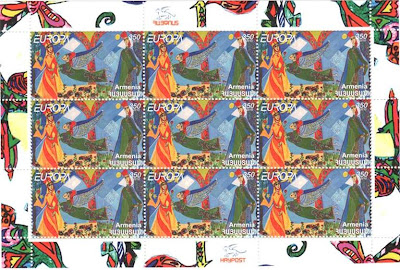 Email ThisBlogThis!Share to TwitterShare to FacebookShare to Pinterest
Libellés : 2010, Armenia

Note : Albania and Gibraltar didn't use the official logo that year.

the Faroe Is., Iceland and Ireland issued a twin issue that year. 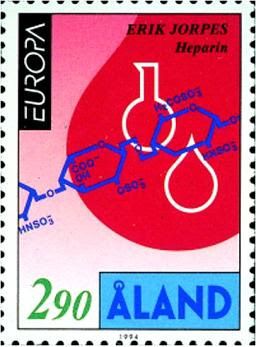 Email ThisBlogThis!Share to TwitterShare to FacebookShare to Pinterest
Libellés : 1994

"In 1993, the CEPT decided to concentrate on telecommunication issues only and the Europa stamps issues coordination was transmitted to PostEurop the association of European public postal operators. Since then a new logo is in use on Europa stamps."

"That year two unofficial issues appeared. The first one from: Belarus; although the new logo was introduced that year they used the old CEPT on there stamps. The other one from the Croat post of Bosnia and Herzegovina. It was the first postal administration of Bosnia to issue Europa stamps but they weren't recognized by the UPU at that time, that's why their issue is also considered as unofficial."

Note : Gibraltar and Belgium (!) didn't use the official logo that year. Albania used a logo depicting a V instead of an U which made the word Evropa. New Europa logo in use from that year.