A jury of seven members of the postal, philatelic, stamp design world elected the best 2011 Europa stamp (here some pictures of the jury in action !) The first stamp to win this new award is the 0.68 € stamp issued by Cyprus and designed by Stelios Karamallakis 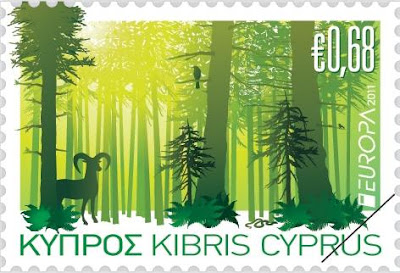 From a graphic point of view, this stamp can be read on different levels. The first impression is it's "greenness", the brightness of it's colours and the fact that it directly refers to this year's them and give a great positive impact on a letter. The second level is the forest depicted on the stamp, the deepness the graphic effect gives. Trees are coming out of the edge of the design giving a growing effect. You can also consider the name of the country in three languages being roots. The third level are the details you get by having a closer look to the stamp. You can see many different animals living in this forest and especially the Cyprus mouflon which is a typical animal from that country. The animals and the trees are designed as a shadow play and remains on pop-up effects of children books which give an extra 3D design to this stamp.