Armeia is the winner of the 2019 Best Europa stamp contest organised by PostEurop. Turkey finished second and Finland is third. 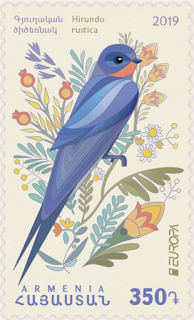 It's the second time Armenia wins the best Europa stamp contest. The first win was in 2007, it was also the first year the contest became an online voting open to everybody !

The result of this competition was announced during this PostEurop's Plenary Assembly held last week in Jersey.

Here is the announcement on Armenia's postal administration website.