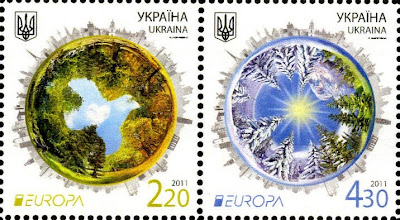 NOTE - Ukrposhta announced a first Europa issue for April/May 2011 but was then cancelled. Hereunder the design of the cancelled issue: 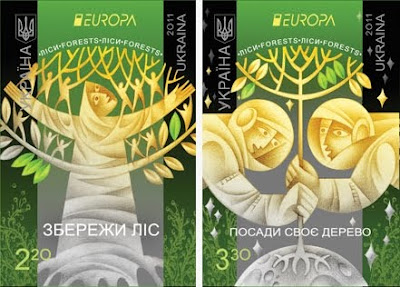 Email ThisBlogThis!Share to TwitterShare to FacebookShare to Pinterest
Libellés : 2011, Ukraine

I love both stamps (canceled and not) GORGEOUS :D but for me the canceled ones are more beautiful, great and intelligent design. The new ones seems to fit to EUROPA 2012 VISIT.

The cancelled one is good, i wonder why'd they have to cancel it. I love the nature appeal of the stamp and it shows a concern for mother earth. I bet, if they would still produce it in other time, it would be purchased worldwide. For those who loves collecting stamps like me, visit ~ Love Stamp

Two very eye-catching stamps, both are beautiful designs. You've got a great blog here. I have added to it my blogroll over on ..

@ Karl - thanks for the comment ! I also added your blog (as I am also a football addict) to my blog roll...