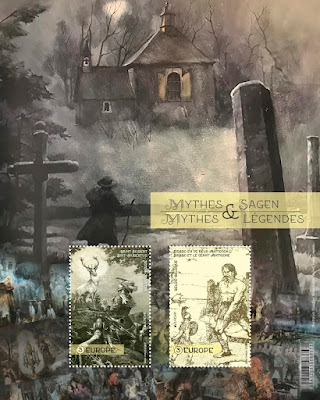 Legend of St Hubertus : Legend holds that on a Good Friday morning, while the faithful were in church, Hubert was hunting in the forest. As he pursued a magnificent stag or hart, the animal turned and Hubert was astounded to see a crucifix floating between its antlers. He heard a voice saying: "Hubert unless thou turnest to the Lord and leadest a holy life, thou shalt quickly go down into Hell." Hubert dismounted and prostrated himself, and after asking "Lord, what wouldst Thou have me do?" is told, "Go and seek Lambert, and he will instruct you." - source : Wikipedia

Legend of Brabo : Silvius Brabo was a mythical Roman soldier who was said to have killed a giant, and by this would have created the name Brabant.
Later this story was also used to explain the name Antwerp ('Antwerpen' in Dutch) which, according to the story, is a derivative of 'handwerpen' (meaning hand throwing). Brabo once killed a giant, called Druon Antigoon, who asked money from people who wanted to pass the bridge over the river Scheldt. When they didn't want to or couldn't pay, he cut off their hand and threw it in the river. Because of this, Brabo also removed the hand of the giant, and threw it into the river.
This mythical story is still shown by the statue in front of the Antwerp City Hall. - source : Wikipedia

Email ThisBlogThis!Share to TwitterShare to FacebookShare to Pinterest
Libellés : 2022, Belgium