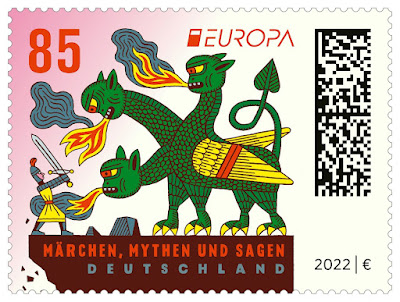 This stamp is issued in a mini-sheet of 10 stamps 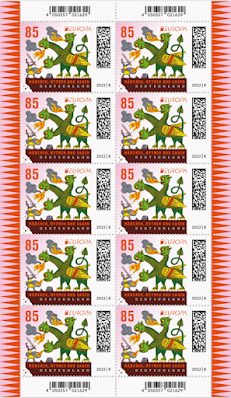 NOTE : this stamp is the first ever to feature a "matrix code" introduced since last year by the German post.

You can lear more about it in this article published in December 2020 by the ÖSVLPH :

"Anyone who scans the letter before sending it can keep an eye on its status via the Post app. Matrix code franking is more forgery-proof and ensures that postal stamps cannot be used more than once."

The motif of the dragon fight - an extremely fortunate choice to represent what connects myths, fairy tales and legends! We already encounter the dragon fighter in ancient myth (e.g. Heracles), as well as in fairy tales from all over the world or in the Saga of the Nibelungs. It is a widespread motif that transcends genres and has been handed down worldwide for centuries.

In these sources, the dragon is a mythical creature. It can symbolise the forces of nature as well as destructive potentates of power. In many cases it stands for 'evil' par excellence. The fight against him requires not only physical strength, but above all cleverness, coupled with courage, ingenuity and the desire to save the world.

Sometimes the gruesome figure hides an enchanted youth who is redeemed by an intrepid girl. Here the threatening figure becomes the lover.

The trivialisation of the dragon in modern children's literature and thus its demonisation is completely alien to the old stories. The myths, fairy tales and legends celebrate the overcoming of fear and terror in the victory over the dragon; they appeal to man's fearlessness and will to stand up to fate, to save humane values and nature.

Email ThisBlogThis!Share to TwitterShare to FacebookShare to Pinterest
Libellés : 2022, Germany