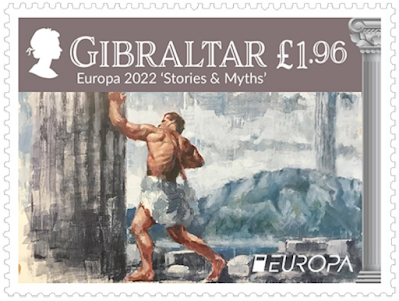 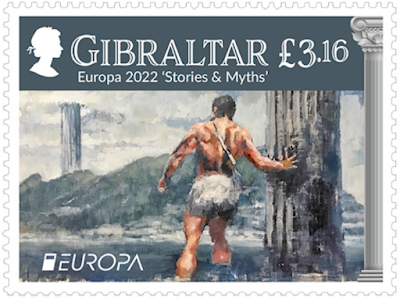 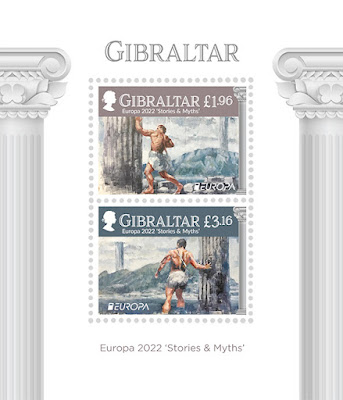 those stamps are issued in mini-sheets of 6 stamps

The Pillars of Hercules is the ancient name given to the promontories that flank the entrance to the Straits of Gibraltar. The Northern Pillar is the Rock of Gibraltar and the Southern Pillar, Abila Mons, has been disputed throughout history, with the two most likely candidates being Monte Hacho in Ceuta and Jebel Musa in Morocco.

According to Greek mythology, when Hercules had to perform twelve labours, one of them (the tenth) was to fetch the Cattle of Geryon of the far West and bring them to Eurystheus; this marked the westward extent of his travels. Alost passage of Pindar quoted by Strabo was the earliest traceable reference in the context: The pillars which pindar calls the - Gates of Gades  when he asserts that they are the farthermost limits reached by Heracles. SInce there has been a one-to-one association between Hercules and and Melqart since Herodotus, the Pillars of Melqart in the temple near Gades/Gadeira (Modern Cadiz) have sometimes been considered to be the true pillars of Hercules.

According to some Roman sources, while on his way to the garden of Hesperides on the island of Erytheria, Hercules had to cross the mountain that was once Atlas. Instead of climbing the great mountain, Hercules used this superhuman strength to smash through it. By doing so, he connected the Atlantic ocean to the Mediterranean Sean and formed the Strait of Gibraltar. One part split mountain is Gibraltar and the other is either Monte Hacho or Jebel Musa. These two mountains taken together have since then been known as the pillars of Hercules, though other natural feautres have been assoicated with the name.

Diodors Sicukus, however, held that, instead of smashing through an isthmus to create the Straits of Gibraltar, Hercules narrowed an already existing strait to prevent monsters from the Atlantic Ocean from entering the Mediterranean sea.

In some versions, Hercules instead built the two to hold the sky away from the earth, liberating Atlas from his damnation.

NOTE - In 1981, Gibraltar used the same legend for their Europa stamps issued on the theme "Folklore and Feasts"! 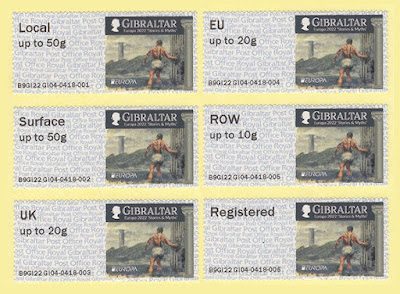 Email ThisBlogThis!Share to TwitterShare to FacebookShare to Pinterest
Libellés : 2022, Gibraltar