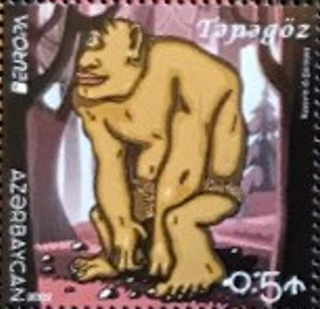 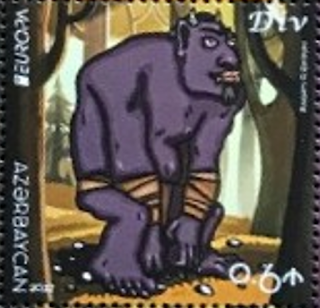 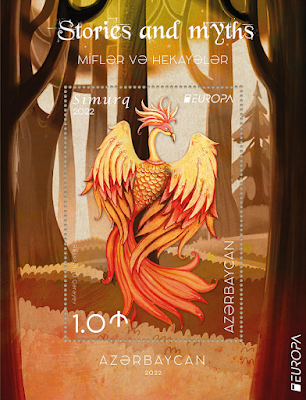 both stamps are issued mini-sheets of 8 stamps 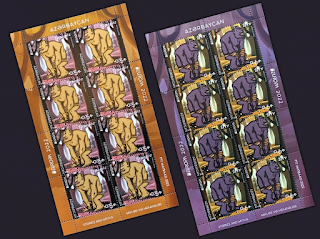 Tepegöz - In Turkic mythology, Tepegoz or Tepegöz is a legendary creature who has only one eye on his forehead – a kind of cyclops. He is an ogre that appears in the Book of Dede Korkut, a famous epic story of the Oghuz Turks. Source Wikipedia

Div or dev are monstrous creatures within Middle Eastern lore. Most of their depictions derive from Persian mythology, integrated to Islam and spread to surrounding cultures including Armenia, Turkic countries and Albania. Although they are not explicitly mentioned within canonical Islamic scriptures, their existence was well accepted by most Muslims just like that of other supernatural creatures. They exist alongside with jinn and shayatin within South- and Central Asia demon-beliefs. They are described as having a body like that of a human, only of gigantic size, with two horns upon their heads and teeth like the tusks of a boar. Powerful, cruel and cold-hearted they have a particular relish for the taste of human flesh. Some use only primitive weapons, such as stones: others, more sophisticated, are equipped like warriors, wearing armour and using weapons of metal. Despite their uncouth appearance - and in addition to their great physical strength - many are also masters of sorcery, capable of overcoming their enemies by magic and afflicting them with nightmares. Source Wikipedia

Simurgh is a benevolent, mythical bird in Persian mythology and literature. It is sometimes equated with other mythological birds such as the phoenix. The figure can be found in all periods of Iranian art and literature and is also evident in the iconography of Georgia, medieval Armenia, the Eastern Roman Empire, and other regions that were within the realm of Persian cultural influence. Source Wikipedia

Email ThisBlogThis!Share to TwitterShare to FacebookShare to Pinterest
Libellés : 2022, Azerbaijan