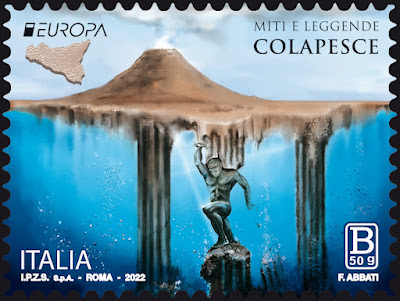 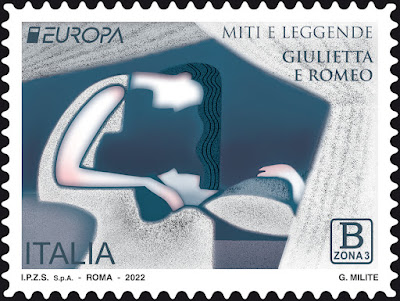 Colapesce - Colapesce holding up one of the three columns on which Sicily rests, consumed by the fire of Mount Etna, to prevent the island from sinking.

In a version from Palermo, edited by Italo Calvino, Colapesce spends all of his time swimming, until his frustrated mother curses him to turn into a fish. He instantly becomes half fish, with duck feet and a frog's throat. He appears to fishermen and warns them of upcoming storms, and also informs them of the marvels found at the bottom of the sea. A king hears of him and summons him, then gives him orders to swim around the island and explore the bottom of the ocean. The king sends him down on numerous dives around Italy. Nick Fish discovers that Messina rests on three columns, some of which are broken, and brings back hot and fresh water from springs in the ocean around Naples. Finally the king urges Nick Fish to explore a bottomless ocean chasm, despite his resistance. He throws his crown into the chasm and orders him to fetch it. Nick Fish reluctantly dives in. Some lentils he was carrying float to the surface, but he but never returns. Source Wikipedia

Romeo and Juliet - Grieving Juliet in the presence of lifeless Romeo.

Romeo and Juliet is a tragedy written by William Shakespeare early in his career about two young Italian star-crossed lovers whose deaths ultimately reconcile their feuding families.
The play is set in the Italian city of Verona.

Email ThisBlogThis!Share to TwitterShare to FacebookShare to Pinterest
Libellés : 2022, Italy