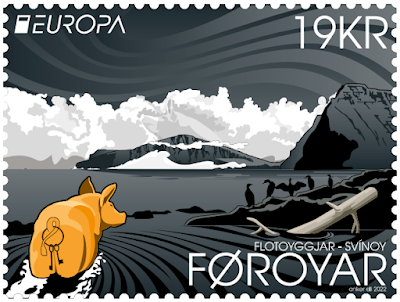 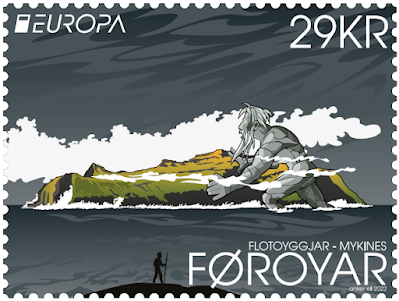 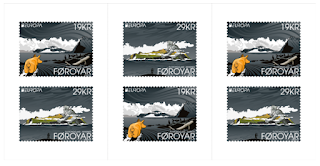 Floating islands
In many island cultures we find legends of so-called floating islands - islands that have mysteriously drifted in from the sea, disappeared again, or run aground and conjoined with other islands, often as a result of witchcraft or similar phantasmic happenings.
The Faroe Islands are no exception in this regard. Most of our smallest islands have some form of floating island legends. In his work from 1673 ”FAROÆ ET FÆROA RESERATA” the priest Lucas Debes describes this phenomenon and attributes it to icebergs drifting past the islands, or a Satanic veiling of the superstitious population. A century later, in 1781-82, Jens Christian Svabo, a man of the Enlightenment, rejected Debes’ theories and attributes the phenomenon to rocklike clouds drifting on the horizon or even ”pollamjørki”, the Faroese term for heavy drifting sea-mist.
And there is little doubt that Svabo’s assumption was correct. Anyone who has seen dense sea fogs drift over and alongside these tiny islands, cannot help feeling that the island itself had begun floating over the sea and through the fog. But reality is usually less interesting than a good story, so let us stick to the legendary world’s colourful explanation of nature’s visual illusions - and look at a few examples of islands that have come floating with their mountains and valleys – and even with pigs and giants following in their wake.
Svínoy – Island of pigs
Just as many other islands Svínoy is said to have originally been a floating island. It often appeared in the north, but it was rarely seen because it was usually shrouded in fog. Now we need to tell you the story of how it came to be one of the permanent inhabited islands in the Faroes.
In the village of Viðareiði on Viðoy, a farmer kept a sow but had no boar, a mature male swine. Despite this, the sow became pregnant and had piglets every year. People were astounded and one could explain how this could have happened. It was well known that the sow occasionally disappeared from the village, but it was never gone for a long time.
One day the sow was seen running eastwards through the village - over the isthmus - and down towards a small bay called Eiðsvík. One of the women in the village got a hold of it and hastily tied a bundle of keys to its tail. The sow then ran into the sea and swam away from land.
A moment later an island was seen drifting from the south. The villagers quickly manned a boat and rowed to the island. This time it did not disappear from sight and they were able to go ashore. Since the sow had iron keys attached to its tail, it fastened to the seabed and the surrounding fog disappeared like dewdrops in the sun. And there the island has stayed ever since.
Ever since the island has been called Svínoy (Pig Island) because of its multitude of pigs - and it was there that the sow from Viðareiði found its mate.
(From Faroese Anthology by V. U. Hammershaimb, Copenhagen 1891)
Mykines island
Another legend deals with ”risi”, a kind of prehistoric giant or colossus who wanted to live in the Faroe Islands. But the islands he really liked were much too small for him. He therefore decided to join some of the smaller islands together in order to create some wiggle room for himself. First, he found the small island of Koltur and placed it where it is today. Then he headed down to Skúvoy and was about to move it up to Koltur. But people on Skúvoy did not like the idea and asked the giant if he really wanted to live on an island that used to belong to ”Kálvur lítli” (Little Calf). Kálvur lítli was a medieval priest, notorious for his evil and wicked ways. The giant did not quite know - he thought that the island had once belonged to a baby calf - and it would probably be beneath his dignity to live in such a place.
The giant then waded northwards and in the north of the Faroe Islands he finally found a reasonably large island that seemed to fit his fancy. He started pushing it southwards, in the direction of Koltur – and everything went reasonably well. But when he came to the shallow fish banks just west of Vágar, the island ran aground and got stuck. For a whole week he struggled to get the island free from the sandy banks, but it would not move an inch. Eventually, the giant became furious and shouted: ”My life! My death! If I only could dislodge this island, I would sink it into the sea!”
When he finally realized that he would not be able to have the island for himself, he certainly did not want anyone else to settle there. This is how the island of Mykines found its location in the Faroese archipelago – so now we know what happened.
Occasionally, people from Sørvágur can see another island floating in the north. It has high mountains, deep valleys and white foaming waterfalls. When people from Mykines hear this story, it raises their concern. Who knows, perhaps the giant is still roaming around and might want to sink Mykines into the ocean to make room for his own new island?
(Loosely retold: Faroese Anthology by V. U. Hammershaimb, Copenhagen 1891)
Anker Eli Petersen

Email ThisBlogThis!Share to TwitterShare to FacebookShare to Pinterest
Libellés : 2022, Faroe Is. 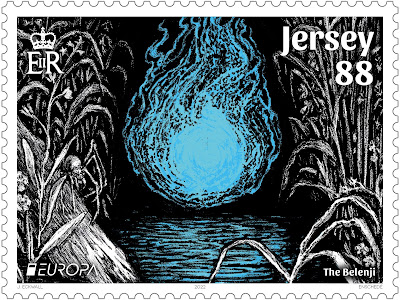 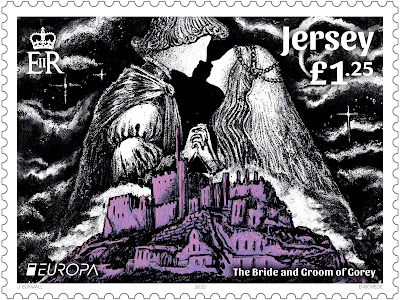 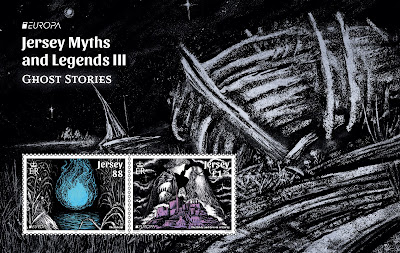 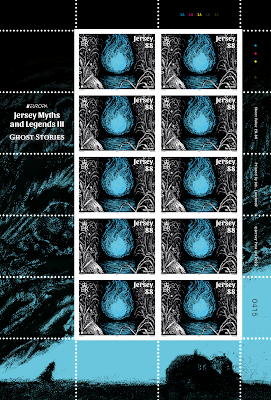 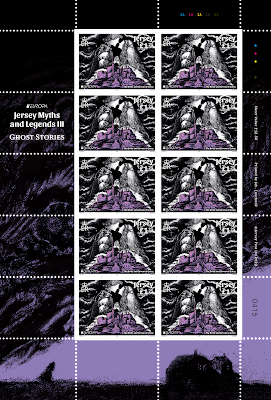 Email ThisBlogThis!Share to TwitterShare to FacebookShare to Pinterest
Libellés : 2022, jersey 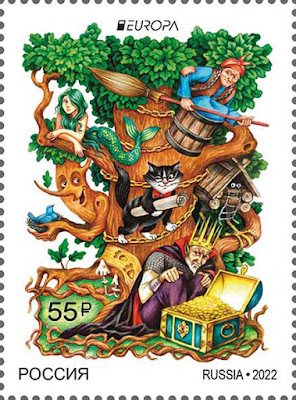 This stamp is issued in a sheet of 12 stamps


In Russia, mythology is closely and inextricably linked to pagan culture; it is filled with tales of gods, rituals, and customs. Over the course of history, people had been inventing various mystical creatures to explain the unknown world around them. As time went on, many of the characters took root and became part of the culture of the peoples; they safeguarded, helped to gather a rich crop, to bring prosperity, recover from diseases and donated happiness.

Many of them are described in the narratives of Russian writers. For example, in poem Ruslan and Lyudmila by Aleksander Pushkin we read a passage about a sacred place Lukomorye and fairy tale personages living there: a learned cat, a mermaid, Kashchey, Baba-Yaga, and a warlock.

Email ThisBlogThis!Share to TwitterShare to FacebookShare to Pinterest
Libellés : 2022, Russia 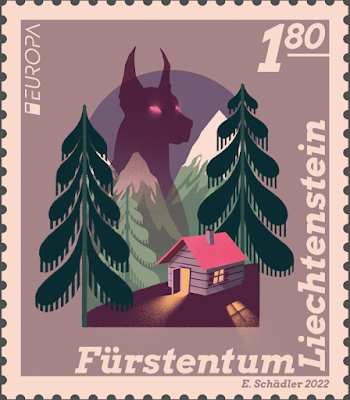 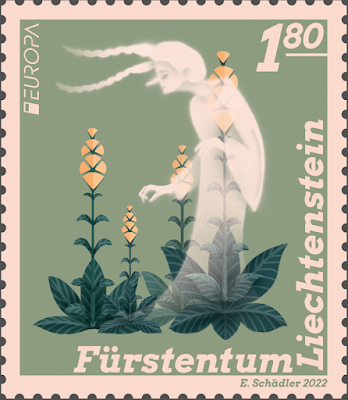 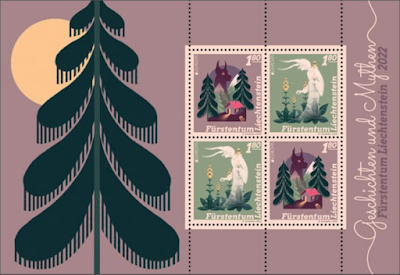 "The White Woman" is a figure that appears in numerous legends and myths in these parts. As a rule, she appears as a harmless being whom observers see by chance or notice by their having an uneasy feeling. On the stamp, the white woman floats through a field full of mulleins and slowly dissolves into thin air, just as she is said to have done, according to legend, when children encountered her. The mullein stands for fearlessness and protection from evil spirits.

The Liechtenstein alpine region is the setting for many eerie legends. A figure to be found in one such legend is "The Tälibudel". The spirit in dog-like form with fiery red eyes is said to have chased an alpine shepherd out of his hut. The illustration by Liechtenstein artist Eliane Schädler shows the scene of this tale with the fearsome creature in the background.

Email ThisBlogThis!Share to TwitterShare to FacebookShare to Pinterest
Libellés : 2022, Liechtenstein 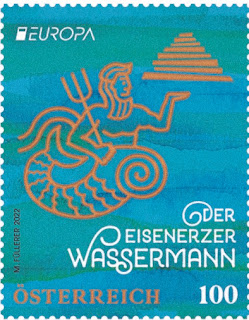 Legend of the Waterman of Eisenerz : According to legend, the discovery of the iron deposits at Erzberg is due to the knowledge of a water man. He lived in a grotto northwest of Eisenerz and was captured by the inhabitants near Lake Leopoldstein with the help of a pitch-soaked cloak. To buy his freedom again, he offered "gold for ten years, silver for a hundred years or iron for ever". The clever people of Iron ore are said to have chosen the latter, whereupon the water sprite showed them the ore mountain. After they had convinced themselves of the ore deposits, they released the water sprite and he disappeared into a karst spring, which has since been called Wassermannsloch. source : Wikipedia

Email ThisBlogThis!Share to TwitterShare to FacebookShare to Pinterest
Libellés : 2022, Austria

A new logo for PostEurop

A few weeks ago PostEurop launched their new logo !

I kinda like it. Easy, as I wasn't very found of the old one any way...

Just as a reminder, PostEurop took over from the CEPT the responsibility for issuing EUROPA stamps.

You can read more about it in the part IV of my Europa stamps' history.

Though, the former logo was used once only (if I'm not wrong). On the second stamp of the 2000 Europa issue of Monaco 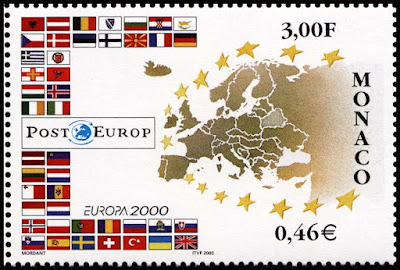 And Belgium used it in the edge of the mini-sheet of their 2003 issue. They did it to celebrate the 10 years of PostEurop. 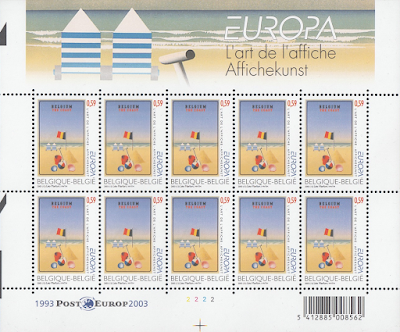 In cooperation with the "Blog timbré de ma philatélie" the 4th edition of the Best Europa stamps "The Collector's choice" competition was held during 5 weeks, 4 qualification rounds and 1 Grand Final in order to vote for your favourite 2021 Europa stamps issue! 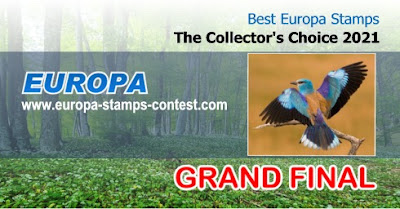 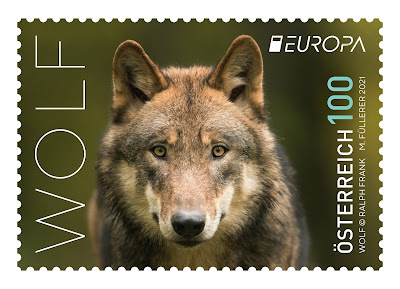 
The winner of the 1st edition was Moldova ; Ukraine won the 2nd edition and Denmark won last year.