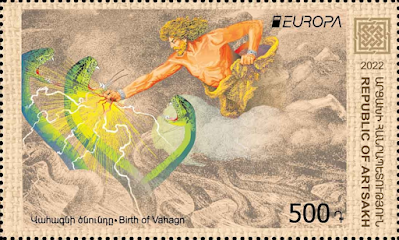 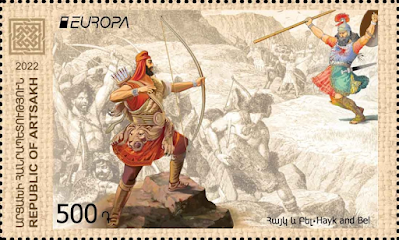 those two stamps are issued in mini-sheets of 10 stamps 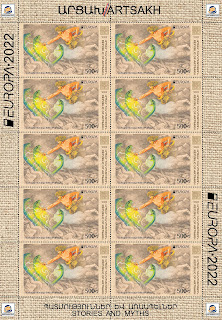 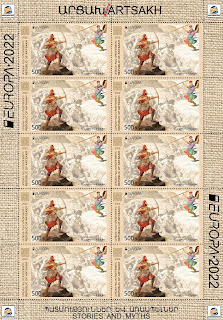 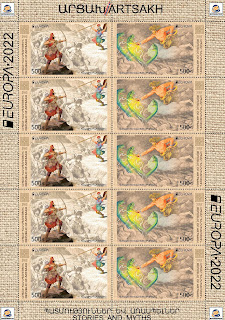 NOTE : those 3 types of mini-sheets are also issued in unperforated version

Birth of Vahagn : Vahagn was a god of fire, thunder, and war worshiped in ancient Armenia. Some time during ancient history, he formed a "triad" with Aramazd and Anahit. Vahagn was identified with the Greek deity Heracles. The priests of Vahévahian temple, who claimed Vahagn as their own ancestor, placed a statue of the Greek hero in their sanctuary. In the Armenian translation of the Bible, "Heracles, worshipped at Tyr" is renamed "Vahagn". Source Wikipedia

Hayk and Bel : Hayk was a handsome, friendly man, with curly hair, sparkling eyes, and strong arms. He was a man of giant stature, a mighty archer and fearless warrior. Hayk and his people, from the time of their forefathers Noah and Japheth, had migrated south toward the warmer lands near Babylon. In that land there ruled a wicked giant, Bel. Bel tried to impose his tyranny upon Hayk's people. But proud Hayk refused to submit to Bel. As soon as his son Aramaniak was born, Hayk rose up and led his people northward into the land of Ararad. At the foot of the mountain he built a village and gave it his name, calling Haykashen. Hayk is the legendary patriarch and founder of the Armenian nation. Source Wikipedia

NOTE : Those 2 legends were already depicted by Armenia on their 1997 Europa stamps on the common theme : "Tales and legends"

NOTE : the stamps issued by the Republic of Artsakh aren't recognized on an international level, not by the UPU nor by PostEurop.

Those stamps are listed in most stamps catalogues (Gibbons, Yvert & Tellier, Michel) and most Europa stamps collectors collect those stamps even if they aren't official stamp issues.

Email ThisBlogThis!Share to TwitterShare to FacebookShare to Pinterest
Libellés : 2022, Artsakh