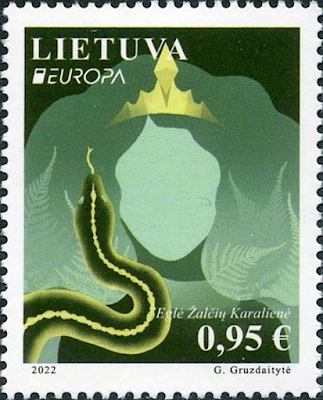 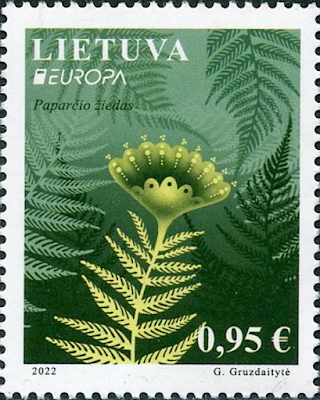 both stamps are issued mini-sheets of 10 stamps 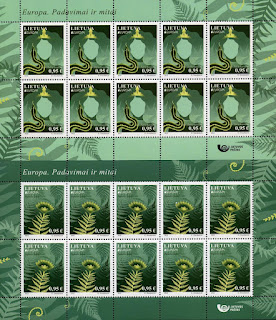 One warm summer day, Eglė, the youngest daughter of a local farmer, went bathing in the sea with her two sisters. Afterwards, returning to the shore to get dressed, she found a serpent in her clothes. To her surprise, the serpent spoke to her in a man's voice and demanded that she promise to become his wife for the return of her clothes. Faced with an immediate need to get dressed and not thinking about possible future consequences, Eglė agreed.

Three days later a great number of serpents pulling a wagon showed up at Eglė's parents' farm to claim the bride. Eglė's family tried to trick the serpents by giving them one of their farm animals, but each time a cuckoo warned the serpents about the deception. Finally, wise to the trickery, serpents succeeded in taking Eglė with them to their master.

At the seashore they were met by Žilvinas, a handsome young man, the Serpent King, who took Eglė to a nearby island and then to his palace under the sea, where they wed. Eglė and Žilvinas lived together happily and had three sons, Ažuolas, Uosis and Beržas, and a daughter, Drebulė, their youngest.

One day the children started asking about their mother's former home. Eglė became homesick and asked Žilvinas to allow her and the children to visit her parents' farm. Žilvinas was against it and set a number of what he thought were impossible conditions - to spin a never diminishing amout of silk, to wear out a pair of iron shoes, and to bake a pie without kitchen utensils. Eglė, however, with the help of a local sorceress, was able to accomplish them and Žilvinas had to allow Eglė and the children to go.

The reunion with the family was such a happy event that Eglė's family did not want to let them return to the sea and decided to kill Žilvinas. But first, they needed to know how to get Žilvinas to appear from the sea.They demanded that the children reveal the family secret. Sensing danger, the sons refused to comply, but the youngest daughter Drebulė became frightened and revealed the secret call.

Eglė's twelve brothers rushed to the seashore, called Žilvinas, who appeared in serpent form, and killed him with scythes.

Not knowing her husband's fate and ending her stay with her parents, brothers, and sisters, Eglė returned to the seashore and called Žilvinas. In reply only a bloody foam appeared.

In her grief, after she realized that Žilvinas was dead, Eglė transformed her family into trees - her sons into an oak, an ash and a birch, her daughter into a trembling aspen, and herself into a spruce. Source Lithaz.org

Email ThisBlogThis!Share to TwitterShare to FacebookShare to Pinterest
Libellés : 2022, Lithuania