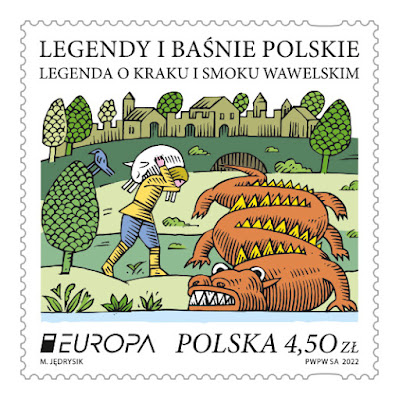 this stamp is issued in a mini-sheet of 9 stamps 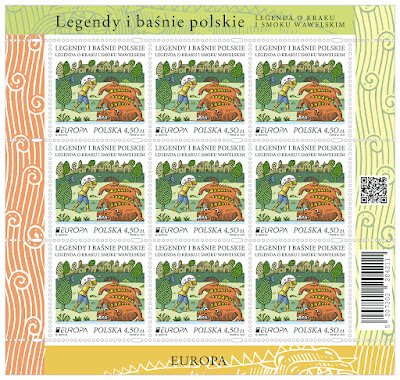 The Wawel Dragon (Polish: Smok Wawelski), also known as the Dragon of Wawel Hill, is a famous dragon in Polish folklore.

According to the earliest account (13th century), a dragon plagued the capital city of Kraków established by legendary King Krak. The man-eating monster was being appeased with a weekly ration of cattle, until finally defeated by the king's sons using decoy cows stuffed with sulfur. But the younger prince murdered his elder brother to take sole credit, and was banished afterwards. Consequently Princess Wanda had to succeed the kingdom.

Later in a 15th-century chronicle, the prince-names were swapped, with the elder as "Krak junior" and the younger as Lech. It also credited the king himself with masterminding the carcasses full of sulfur and other reagents. A yet later chronicler (Marcin Bielski, 1597) credited the stratagem to a cobbler named Skub (Skuba), adding that the "Dragon's Cave" (Polish: Smocza Jama) lay beneath Wawel Castle (on Wawel Hill on the bank of the Vistula River). Source : Wikipedia

Email ThisBlogThis!Share to TwitterShare to FacebookShare to Pinterest
Libellés : 2022, Poland