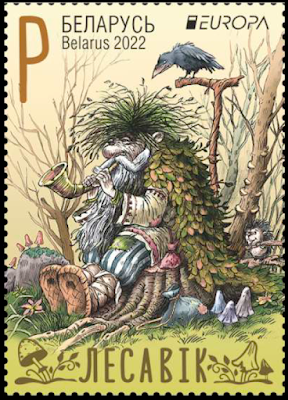 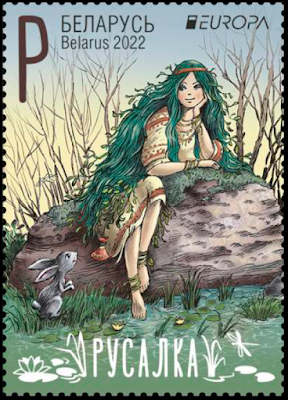 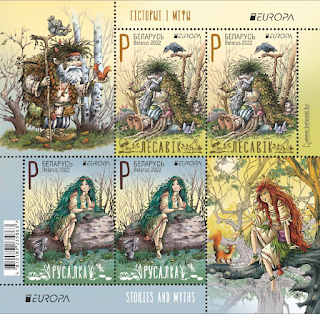 both stamps are issued in mini-sheets of 5 stamps 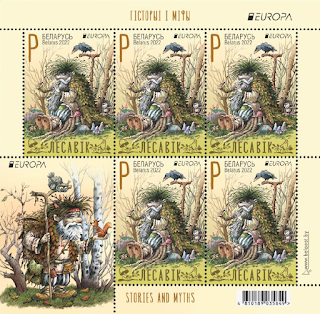 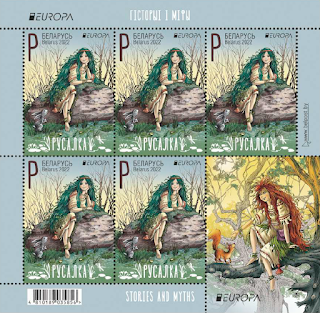 Lesovik - The Leshy is a tutelary deity of the forests in pagan Slavic mythology. As the spirit rules over the forest and hunting, he may be related to the Slavic god Porewit.

The Leshy is masculine and humanoid in shape, is able to assume any likeness and can change in size and height. He is known by some to have a propensity to lead travellers astray and abduct children, which would lead some to believe he is an evil entity. He is, however, also known to have a more neutral disposition towards humans, dependent on the attitudes and behaviours of an individual person, or local population, towards the forest. Leshy could take children who were cursed by their relatives (in particular, parents) away to the forest people. Some would therefore describe him as more of a temperamental being, like a fairy.

Rusalka - In Slavic folklore, the rusalka is a typically feminine entity, often malicious toward mankind and frequently associated with water, with counterparts in other parts of Europe, such as the French Melusine and the Germanic Nixie. Folklorists have proposed a variety of origins for the entity, including that they may originally stem from Slavic paganism, where they may have been seen as benevolent spirits. Rusalki appear in a variety of media in modern popular culture, particularly in Slavic language-speaking countries, where they frequently resemble the concept of the mermaid.

In Belarus they were linked with the forest and field. They were usually pictured as beautiful naked maidens, but in some areas they were imagined as hideous and hairy. They were said to tickle men to death. According to some Russian beliefs, rusalki had the appearance of very pale little girls with green hair and long arms. In other beliefs, they were described as naked girls with light brown hair. Source Wikipedia

Email ThisBlogThis!Share to TwitterShare to FacebookShare to Pinterest
Libellés : 2022, Belarus