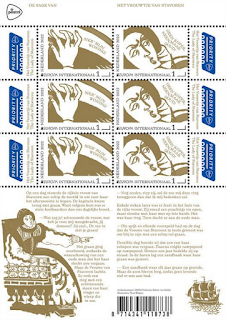 Het vrouwtje van Stavoren (The Lady of Stavoren is a folk tale from the Netherlands which originated in the 16th century.

Now a village of just 1,000 inhabitants, Stavoren was once a wealthy port city in the Dutch province of Friesland but began to decline in the late Middle Ages after a sandbank formed outside the harbour, blocking ships from entering and exiting. Several stories have been told over the years to explain the forming of the sandbank, including the tale of the Lady of Stavoren.

The story, of which more than 27 versions are known, involves an exceedingly rich patrician merchant widow, who desired ever greater riches. She sent a captain of her merchant fleet out in search of the greatest treasure in the world. When he returned with wheat, declaring wheat to be "the most precious thing in the world," as it can feed the hungry, the widow, in her overweening pride and anger at his (as she perceived it) foolishness, let the wheat be thrown overboard into the harbour of Stavoren.

When she was cautioned against this wicked behaviour, being reminded of the fickleness of fate and (despite her wealth and power) of the delicateness of her station, in hubris she took a ring from her finger and cast it into the ocean, declaring that she was as likely to fall into poverty as she was of regaining the ring.

Soon afterwards, during a banquet thrown for her fellow Hanseatic merchant princes, she finds the ring inside a large fish served to her. As this event portended, she lost her wealth, living out her remaining years in destitution, begging for scraps of bread. In divine retribution the port had silted, and the wheat that had been cast overboard now grew in the resulting sandbank that closed the harbour and ruined the city.

The tale has inspired songs, plays, operas and films. A statue of the fabled Lady gazing out to sea was erected in front of Stavoren harbour in 1969. Source : Wikipedia

Email ThisBlogThis!Share to TwitterShare to FacebookShare to Pinterest
Libellés : 2022, the Netherlands