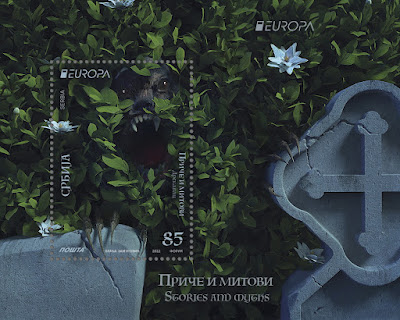 The Drekavac is also depicted on the 2022 Europa stamps issue of the Serb post of Bosnia and Herzegovina.

Drekavac (literally, the Shrieker) is a creature from the mythology of the South Slavs, especially represented in the mythology of the Serbs. The name of this creature comes from the verb drečati, which means to shriek or scream. Legends mention that it produces frightening cries that resemble those of children, howling wolves, bleating male goats, meowing cats or screeching birds. These cries, it is believed, can make a person deaf.

Folk beliefs also say that Drekavac is like a vampire, a material manifestation of the soul of the deceased who cannot find its peace after death, so it comes out of the grave at night and torments those who have wronged them in life. According to other legends, Drekavac is the manifest form of the soul of a dead, unbaptized child, who comes out of its grave at night and visits its parents' house.

In the description of Drekavac, it is most often mentioned that it is a demonic being, covered with long fur, which it constantly treads on and because of that he shrieks. It has large and sharp nails on its fingers, resembling claws, and it is believed that it is capable of shapeshifting.

These creatures inhabit caves, forests, ponds, rivers and willows, and can be found only at night, near cemeteries or forests. They are very afraid of daylight and dogs. They attack people who find themselves near a cemetery or forest at night, by jumping on their backs, riding them, and forcing them to run all night, until the first roosters. When the first roosters crow, Drekavac pushes its prey away by the road or the forest, and leaves it lying there.

Legends say that Drekavac is the most dangerous for people in the period of the so-called "Unbaptized days", from Orthodox Christmas to the Epiphany, when they are most often encountered.

NOTE : The Drekavac is also depicted on the 2022 Europa stamps issue of the Serb post of Bosnia and Herzegovina.

Email ThisBlogThis!Share to TwitterShare to FacebookShare to Pinterest
Libellés : 2022, Serbia