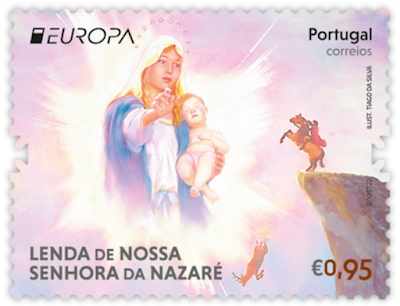 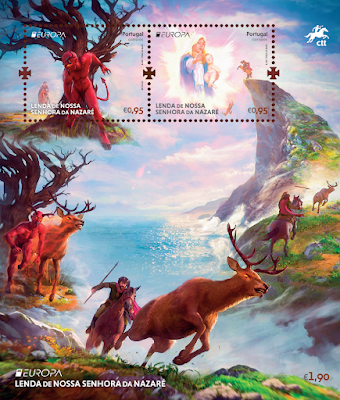 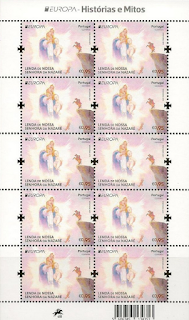 Legend of the Miracle of Our Lady of Nazaré - Salvation in extremis is what is often dreamt of in times of great distress. Or something to which, under such circumstances, the prayers of the most faithful are addressed. And that’s what helped Dom Fuas Roupinho on a certain foggy day. On 14 September 1182, the Captain-General of the Porto de Mós castle was hunting, when he sighted what appeared to be a deer. Excited at the prospect of good meat, he launched into fiery pursuit. So invested was he in the task that he only realised that he was on top of a cliff when the fall seemed all but inevitable. At the last moment however, his horse stood on its hind legs, which have been engraved there ever since. The image of the prey, which would ultimately turn out to be the devil, had vanished. Dom Fuas Roupinho was rescued through the instant intervening salvation of Our Lady of Nazaré after having appealed to her in supplication. The image of the saint was hidden a little further down, in a small grotto located on the headland. Relieved by such a provident intervention, the knight dismounted, descended into the sacred hollow, fell to his knees and prayed in gratitude. Shortly afterwards he ordered the construction of a small church at the top of the cliff, the Chapel of the Memory (Ermida da Memória), where he placed this image. The relic was already very old at the time. It was said to have been made by Saint Joseph, in the original village of Nazareth, in Palestine. A few centuries later, it would have been transferred to the Iberian Peninsula, to a monastery near Mérida. There it remained until the Arab invasion of 711. Trying to protect it, the Gothic King Rodrigo and the monk Frei Romano decided to take her with them towards the Atlantic coast. The grotto at the top of the cliff was the chosen location. And there it stayed until the miracle that saved Roupinho. After remaining in the evocative chapel that he had erected in 1182, in 1377 the image was moved to a new sanctuary that King Fernando I had decided to build and which would be rebuilt in the 17th century. It is there that, even today, the image of Our Lady is venerated. And it is from there that worship of Our Lady of Nazaré spread throughout the destinations of the Portuguese maritime explorers, thanks to her popularity among the peoples of the sea.

Email ThisBlogThis!Share to TwitterShare to FacebookShare to Pinterest
Libellés : 2022, Portugal