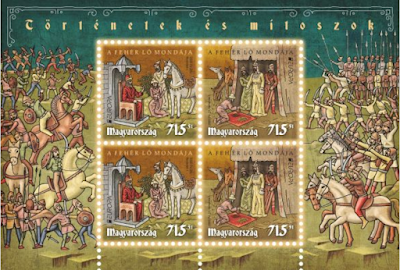 The tale of the white horse is one of the myths and legends about how the land of Hungary was acquired dating from the time the Magyar tribes settled in the Carpathian Basin. This was passed down by oral tradition for centuries until it was recorded in writing. Several sources have survived about this story. The legend of the white horse was included by Anonymus in his historical work, but it is also mentioned in the Buda and Dubnica Chronicles. The most complete story is preserved in the Illuminated Chronicle, written at the end of the 13th century. According to the legend, when the chieftain Árpád and his nobles heard of the wealth of Pannonia, they sent an envoy with the most beautiful steed from Árpád’s stable, a white horse, as a present to the prince of the province, Svatopluk. In exchange the envoy asked for a canteen of water from the Danube, a handful of soil and some grass from the meadows. Little did Svatopluk realise that by giving these he was actually handing over the right to the land. The story goes that the Hungarian chieftains were exploiting an ancient eastern custom which was based on the belief that the soil, dust or any other object taken from a country, settlement or house would place that country or area under the power of its enemy. Árpád then entered Pannonia with the seven chieftains, not as a guest, but as the rightful owner of the land.

Email ThisBlogThis!Share to TwitterShare to FacebookShare to Pinterest
Libellés : 2022, Hungary