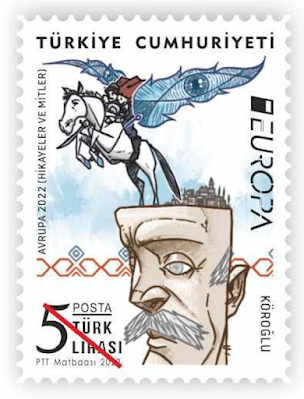 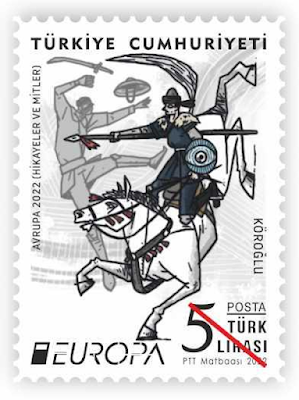 both stamps are issued in mini-sheets of 9 stamps 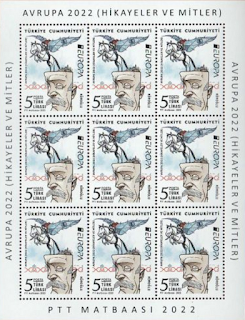 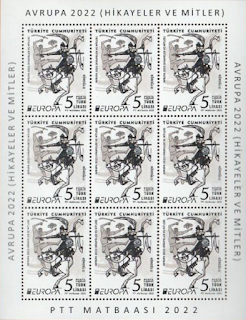 Köroğlu is a semi-mystical hero and bard among the Turkic people who is thought to have lived in 16th century. The name of "Koroghlu" means "the son of the blind man".
Köroğlu destanı as Rushen Ali, the son of the stableman Koca Yusuf lives in Dörtdivan under the service of the Bey of Bolu. One day, Yusuf comes across a filly which, to his trained eye, is an animal that will turn into a fine beast if well-fed. Bey wants to give good fillies to the Sultan as a present to repair their worsening relationship. However the Bey does not know enough about horses to appreciate the thin, famished animal that is presented to him. Being a man of foul and easily provoked temper, he suspects that he is being mocked and orders the poor worker to be blinded. His son, therefore, gains his nickname and harbors an ever-increasing hatred towards the Bey of Bolu in his heart as he grows up. The mare, which he names Kırat, grows up with him and indeed turns into an animal of legendary stature and strength.

One day, Hızır shows himself to Yusuf in a dream and tells him that soon, the waters of the river Aras will flow briefly as a kind of thick foam and whoever drinks that foam will be cured of whatever physical problems that may be ailing him, including blindness and aging. Yusuf goes to the shore of the river with his son, but his son drinks the foam before he does. As this miracle can give everlasting health and youth to only one man, Yusuf loses his chance to see again; and dies a few days later, ordering his son to avenge him.

In some versions of the story, neither Yusuf nor his son can drink from the foam. Yusuf is warned by Hızır just before the phenomenon occurs, but being an old and blind man, he cannot reach the river in time. Köroğlu is by the river when the foam starts flowing, but, as he is ignorant of the significance of the event, he does not drink from the river. Instead, his horse Kırat does and becomes immortal.

After his father's death, Köroğlu takes up arms against the Bey. As he has only a few followers, he does not engage the army of Bolu directly and uses guerrilla tactics instead. He raids and plunders his former master's property, and eludes his would-be captors by staying on the move and fleeing to distant lands whenever his enemy organises a large-scale campaign to capture him.

Before he succeeds, however, the knowledge of firearms is carried by merchants to Anatolia. Even the simple guns of the time are sufficient to change the ways of the warriors forever: The balance of power is upset by the "holed iron", as Köroğlu calls the tool when he first sees one, and the Beys of Northern Anatolia engage in brutal warfare with each other. The fighting goes on and on, with no end in sight. Köroğlu realizes that even if he succeeds in bringing down the Bey of Bolu, he won't be able to bring back the old, chivalric world that he was born into. The warrior-poet disbands his followers and fades into obscurit. Source Wikipedia.

Email ThisBlogThis!Share to TwitterShare to FacebookShare to Pinterest
Libellés : 2022, Turkey