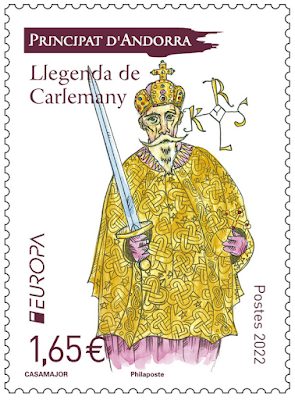 Charlemagne was king of the Franks, Lombards and Emperor of the West and laid the foundations for the medieval kingdoms of Europe.
Legend has it that the emperor Charlemagne continued the task of driving the Saracens back to the Iberian Peninsula, which his grandfather Charles Martel had begun. His passage through the Pyrenees was a response to the request for help from the inhabitants of the Valira valley, who had had to flee before the arrival of the Arabs. After many battles, the emperor and his son Louis the Pious succeeded in liberating this territory with the help of its inhabitants. To thank them for their courage and help, the two rulers granted various prerogatives and privileges to the Andorrans, expressed in the Carta Pobla, including their sovereignty and the designation of these lands by the name of Andorra. From this document, Antoni Fiter iRossell, who was in charge of finding the origins of the country, made Charlemagne the founder of Andorra by taking up this legendary story that could have been legendary story, which may have been based on older accounts. Later, almost a century ago almost a century ago, the Carta Pobla was considered apocryphal.

NOTE : In 1980, the French post of Andorra already issued a Europa stamp depicting Charlemagne. The common theme was "Famous people" that year.