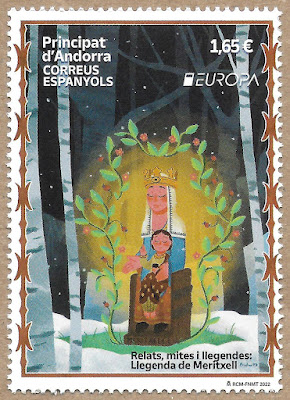 Our Lady of Meritxell - In the late 12th century, on January 6, a wild rose in bloom was found by villagers from Meritxell going to Mass in Canillo. It was out of season and at its base was found a statue of the Virgin and Child. The statue was placed in the Canillo church. However, the statue was found under the same wild rose the next day. The statue was taken to the church of Encamp. However, as before, the statue was again found under the same wild rose on the next day. As in similar legends elsewhere, the villagers of Meritxell took this as a sign and decided to build a new chapel in their town after they found an open space miraculously untouched by the winter snows. Source Wikipedia